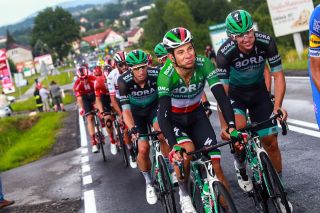 Davide Formolo believes he can win a Classic in 2020 after placing second at Liège-Bastogne-Liège in April. The Italian has left Bora-Hansgrohe for UAE Team Emirates, where he will also seek to develop as a Grand Tour rider.

The Italian's best finish in a Grand Tour came in 2016, when he placed ninth overall at the Vuelta a España, and he also took 10th at the Giro d'Italia in the two successive years. Formolo has been a consistent performer in La Doyenne, taking seventh in 2018 before coming home behind Jakob Fuglsang in 2019.

"For the Classics, I see myself already capable of winning, and I can't say the same for the Grand Tours," Formolo told La Gazzetta dello Sport. "But I'm ready to fight for a high placing, learning from the mistakes I’ve made in the past.

Formolo, Schachmann give Bora-Hansgrohe two on the podium at Liège-Bastogne-Liège

"From my desire to do well, to show everything, I've trained too hard. I'd come to the start already on top form and after a week I was flat. They call it 'over motivation.'"

Formolo will once again ride the Giro in 2020, while Tadej Pogačar and Fabio Aru are slated to line up at the Tour de France.

"In mid-January, I'll be in Valencia to study some positions for the time trial," Formolo said. "My first race is the UAE Tour, then Tirreno-Adriatico and my debut at Milan-San Remo. I'll have a training camp on Mount Teide to prepare for Amstel, Flèche and Liège, then a week on Mount Etna before the Giro."

Formolo will hope to be in the Italian team for the Tokyo 2020 Olympics after placing second at the test event in August, though he said that he preferred not to discuss the prospect of going to Japan with the squadra azzurra "out of superstition."

2020 will also see Formolo make his debut at Milan-San Remo, and while La Classicissima may not be tailored to the Italian champion like the Ardennes Classics, he will approach the race with ambition.

Formolo, who turned 27 in October, tripled his tally of wins as a professional in 2019 to three thanks to his stage victory at the Volta a Catalunya and his triumph in the Italian national championships.

"I maybe lacked the desire to take risks," he said. "I learned that at Bora: to win, you have to risk losing."