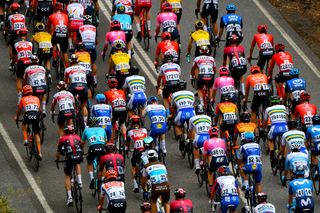 The men's peloton at the 2020 Tour Down Under (Image credit: Bettini Photo)

The CPA riders' association (Cyclistes Professionnels Associés) has issued lengthy statement calling for unity in the peloton but Cyclingnews understands a rebel group of around 300 riders still intends to push for change,.

An Extraordinary CPA Assembly is scheduled for October, where the rebel riders hope to challenge the CPA bylaws in the hope of introducing a more direct way of voting and representation.

CPA President Gianni Bugno hit out at the rebels in an open letter sent to the riders, calling on them to be more active in the CPA.

"I am very disappointed about all the attacks against our association," Bugno wrote.

"In order to avoid any misunderstanding, I kindly ask you to keep yourselves informed and not to believe the lies which are spread by individuals who do not know the facts, who are trying to discredit what we do for the riders, and who put their own interests before yours.

The Power List: The 50 most influential people in cycling

Lefevere: ASO and the UCI are holding teams by the balls

"If there is something that is not clear or if you have any doubts about our actions, there is no need to draw up petitions."

The rebel riders, who came together after signing a petition during the COVID-19 pandemic lockdown, have not created a formal group but are pushing for more involvement and a more direct one-rider, one vote system. Former rider Stef Clement coordinated the initial coming together of the rebels, with Luuc Eisenga, who has worked for a number of teams and the AIGCP (the teams’ association) is helping guide them.

Some 340 riders have apparently put their names to the petition but are already coming under pressure from their teams for doing so. However, the group is set to continue to push for change via dialogue with the CPA and via the Extraordinary CPA Assembly. It also plans to study the legality of the CPA voting system.

The CPA is funded by a cut of two per cent of rider prize money, some WorldTour funds, and occasional donations from the UCI. An umbrella body of national associations, cycling's historic nations such as France, Italy and Spain hold sway on the CPA. The national federations are allowed to block votes at the CPA Assembly, with the major nations using their large membership numbers to keep control. Individual riders not represented by a national association have to attend the CPA Assembly in person if they want to vote.

Cyclingnews understands that Chris Froome is part of the counter-movement, or rebel group, and took part in the CPA Annual Assembly on Monday evening, along with Philippe Gilbert and 20 or so other individual riders and national representatives.

The CPA revealed that UCI President David Lappartient also took part, explaining why the UCI's Professional Cycling Council has voted to approve the use of funds from the UCI's WorldTour Reserve Fund to fight a legal battle in the European courts with the Velon group of teams and the Italian teams' association.

Bugno described reports of the demands made by the rebels as "fake news". He insisted the CPA is open, transparent and working for interests of the riders. Bugno defended the umbrella national association stricture.

"As you know, we have committed ourselves to promoting the creation of new national associations all over the world," he wrote.

"It is not an easy task, but we believe that this is the best solution in order for you to be best represented by our delegates. Indeed, they speak your language, they know the legislation of your country and they have close ties with the sports institutions and national authorities of your country.

"Cycling is becoming more and more global – and so is the CPA, which firmly believes in the association-based model which was chosen at its foundation. I am asking for your help also for this complex project. Please help us identify the right individuals we can rely on to best protect you also at a local level."