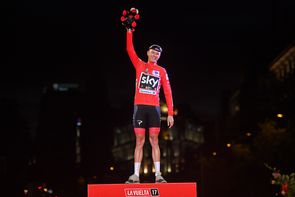 He started his career as a pro with Team Barloworld in 2007 before joining Team Sky in 2010. He finished second in the 2012 Tour de France behind teammate Bradley Wiggins, then went on to win it in 2013. After crashing out of the 2014 edition of the race, Froome bounced back to stamp his authority on the race by winning the 2015, 2016, and 2017 Tours. In 2017, he added the Vuelta a Espana to his palmares.

Although his second straight Tour of Oman victory hinted at a repeat of his 2013 dominance, 2014 proved to be a disappointing year for Froome. He struggled with illness and his Tour of Romandie win was overshadowed by a controversial and hastily-granted Theraputic Use Exemption (TUE) for a corticosteroid.

He had once again he built his season around the Tour de France but as defending champion he was forced to abandon the race on stage five with fractures to his hand and wrist.

He came back for the Vuelta a Espana and played out a series of entertaining scraps with Alberto Contador, but came off second best. Still, it was his fourth straight season with a Grand Tour podium finish.

The year when Froome came of age. No longer condemned to playing second fiddle behind Bradley Wiggins, he dominated the stage race calendar in much the same way as his compatriot had in 2012. His wins included the Tour of Oman, the Criterium International, the Tour of Romandie and the Criterium du Dauphine, while he was second behind Vincenzo Nibali at Tirreno-Adriatico.

Then came the Tour de France, which Froome had set his sights on since the start of the year. He took the yellow jersey on stage eight to Ax 3 Domaines, put time into his rivals on the two individual time trials and won again atop Mont Ventoux. With the exception of a blip in the crosswinds and a bonk halfway up Alpe d’Huez, it was a dominant display with a final winning margin of over four minutes.

After a breakthrough performance at the 2011 Vuelta a Espana, Froome was an increasingly important figure at Team Sky, although 2012 saw him largely play the role of domestique to Bradley Wiggins. He was a key part of Wiggins’ Tour de France victory, despite causing controversy on stage 11 to La Toussuire when he attacked his leader before being ordered to drop back.

He then won an Olympic medal, taking bronze in the time trial behind Wiggins and Tony Martin. At the Vuelta he slugged it out for the leader’s jersey with the likes of Alberto Contador and Joaquim Rodriguez before fading with fatigue in the second half of the race.

Second place at the Vuelta a Espana marks 2011 out as Froome’s breakthrough year. He finished ahead of team leader Bradley Wiggins and had he not been held back by his team loyalties he might have gone one better on the podium. It was to be the first episode in the Froome-Wiggins soap opera.

The diagnosis of the parasitic disease Bilharzia at the end of 2010 - and the treatment that has allowed for – was credited with his transformation into a rider capable of Grand Tour podiums.

Team Ineos to launch 'My Road to Recovery' on August 3

William Fotheringham looks back to the precedents of 1976 and 1983

Predicting the team to support Geraint Thomas and Egan Bernal