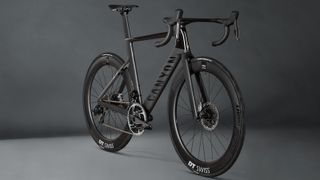 The new Aeroad has launched.

More than a year on from its appearance beneath Mathieu van der Poel at the 2019 autumn semi classics, Canyon has finally unveiled the bike that will become a pivotal weapon in the arsenal of the brand's numerous sponsored teams Movistar, Canyon SRAM, Alpecin Fenix, Arkea Samsic and more.

The original Aeroad set a high bar, it pioneered a design philosophy that has been copied by many in the six years since its launch. It is a bike that has won at every level, from the local criterium circuit near you, to that Amstel Gold victory by Van der Poel. With that, engineers had a difficult brief with the new bike: Design a bike that was even more aerodynamic, lighter, and with a modern integrated cockpit that retains the same sharp handling. In addition, with Canyon's direct-to-consumer service, they wanted a bike that could be delivered safely, then built and adjusted easily at home.

The resulting claims from Canyon are a brand new Aeroad that is faster, lighter, better handling and more comfortable. There are a few tricks up its sleeve to make it easier to live with too, such as adjustable handlebar widths and cut-free stem height adjustability, as well as the return of 650b wheels for improved handling on the two smallest sizes.

The range will comprise eight models across three platforms. At the lower end sits the Aeroad CF SL, a bike that will pair a full carbon frame with mechanical shifting and external cable routing. In the middle of the range sits the Aeroad CF SLX which features full system integration. The halo model will be the new benchmark, the Aeroad CFR.

Canyon understands that aerodynamic drag is the single biggest resistance in cycling for any rider travelling at 14kph or above. With that, Canyon enlisted help from Swiss Side, a company founded by former Sauber Formula One engineers, who with the help of the most advanced CFD software available, set about making the most efficient race bike on the market. The team performed more than seven times as much CFD analysis as the outgoing Aeroad in order to not only maximise efficiency at zero degrees yaw but to harness the sailing effect in crosswinds. Even compared to more recently released competition, the original Aeroad is still measured as one of the fastest bikes available today, yet Canyon's projections put the new Aeroad even faster again, right back at the top of the standings.

A 6.8kg bike made for racers

A common theme throughout 2020 is ensuring race bikes combine both aerodynamics and the low weight such that the bike is able to meet the UCI's weight limit of 6.8kg to ensure racers can have maximum aerodynamics without the compromise of increased weight.

Canyon's engineers set about breaking the bike down to its individual components in order to reduce the weight across the board without compromising frame stiffness. The end result is a weight reduction of 168 grams compared to the previous Aeroad CF SLX, while managing to achieve a stiffness gain of 14 per cent.

This improvement is compounded by Alejandro Valverde's decision to use the Aeroad R065 for every stage of this year's Tour de France: Flat, rolling, high-mountains - even the latter part of the stage 20 time trial. Cyclingnews' size XL test model weighs in at a very respectable 7.3kg complete with deep-section clincher wheels and bottle cages.

Thinking inside the box

As part of the design brief, Canyon wanted a modern integrated cockpit to remove cables from the wind. Not only does this improve aerodynamic efficiency, but it also offers a considerably cleaner aesthetic. However, removing and refitting an integrated cockpit is generally a more labour intensive process, and with Canyon's direct-to-consumer business model, the brand faced further complexities.

Delivering a bike via courier requires a bike to be boxed, and to remove a cockpit for shipping presents Canyon's customers with the unenviable task of refitting it upon delivery. Canyon engineered a solution to this problem, providing handlebars that can be disassembled at the tops, meaning the drops, hoods and a portion of the tops can be detached, without the removal of cables or brake hoses. This not only improves the safety of the bike during its inaugural journey but also when the owner wishes to travel with their bike in future.

Not content there, though, Canyon utilised this feature to offer a commonly frustrating adjustment for new bike owners; handlebar width. In an industry first, Canyon's CP0018 cockpit can be adjusted to widths of 39cm, 41cm or 43cm wide for the 110mm stem size fitted to our test bike. (Shorter stem lengths offer a narrower starting width and the same 4cm range of adjustment.)

The other frustration experienced by owners of bikes with integrated aero cockpits is the inability to temporarily adjust the height of one's handlebars.

With a traditional stem, spacers and top cap design, a spacer can simply be placed above the stem to allow the cockpit to be reassembled safely with a lower position. Canyon understands that this is a rather more committed process with many integrated cockpit designs, where in order to reassemble the cockpit, the fork steerer tube must be cut, meaning the original higher position is no longer viable.

To remedy this, Canyon has introduced a quill-type stem, which essentially slides around the outside of the fork steerer. Secured into place by a clamping screw and wedge. For increased safety, the system itself is self-locking, meaning that even if the clamping screw were to be improperly installed, the system would remain attached and the bars pointing in the same direction as the front wheel.

Spacers can then be used like normal to increase or decrease the height of the handlebar by up to 15mm, and with the removal of a spacer, the stem will slide further over the steerer.

A geometry fit for the majority

While the overarching task at hand has been to make a race bike that is as aerodynamic as possible, as light as possible and ultimately, the fastest bike available. However, Canyon also understands that aero affects everyone, not just pro riders racing at 45kph. With that, it wouldn't help riders go fast if it was suitable only for pro racers and yoga instructors, so Canyon has taken the aggressive position of the previous Aeroad, increased the stack by 9mm and decreased the reach by 5mm. This results in a riding position that mirrors the 'Sport Pro' geometry of the brand's Ultimate lightweight race bike.

The bike is already being ridden by Movistar, Canyon SRAM, Arkea and Alpecin Fenix.