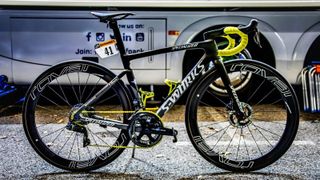 The Specialized Tarmac is a no-compromise race bike, designed to be combine the best of the Tarmac and the best of the Venge. According to data from Specialized, it is the fastest bike in the peloton when aerodynamics and weight are considered able to meet the UCI's minimum weight limit of 6.8kg.

The trend of increasing a bike's aerodynamic efficiency without adding weight is one that has swept across the bike industry in 2020 and Specialized is at the forefront.

With the Tarmac SL7, Specialized has a bike that is 45 seconds faster than its predecessor without compromising on weight, making it the fastest bike in the peloton at 6.8kg. No longer are riders swapping between bikes depending on the parcours, trading off weight in favour of speed or vice versa. The Tarmac SL7 is the fastest everywhere.

Designers improved tube shapes throughout, integrated cables within the cockpit, and paired the bike with new Roval wheels to maximise the new bike's aerodynamic efficiency and retain the low weight of the Tarmac SL6. They used Rider First Engineered™, a size-specific approach to frame design, which ensures every rider on every frame size gets the same world-class bike handling.

The resulting Tarmac SL7 enables riders to have their cake and eat it, thanks to a combination of aero performance, increased stiffness and compliance where it matters, packaged in a bike that perfectly marries Venge-level stiffness and aerodynamic efficiency with the incredible compliance and responsiveness for which the Tarmac SL6 was known.

With its uncompromising performance, it's perhaps unsurprising to see that both of Specialized's sponsored teams at the Tour de France, Bora-Hansgrohe and Deceuninck-QuickStep, are using the Tarmac SL7 as their race bike of choice, no matter the terrain.

The bike has seen numerous successes in the race already, including four days in the yellow jersey courtesy of Julian Alaphilippe, as well as 13 days in green shared between Peter Sagan and Sam Bennett.

The Tarmac SL7 was ridden to a stage win by Julian Alaphilippe on stage 2, a route that involved three categorised climbs. Piloting the SL7, Alaphilippe forced the stage's decisive breakaway selection on the final uncategorised climb of the day, before outsprinting Marc Hirschi (Team Sunweb) and Adam Yates (Mitchelton-Scott).

Far from just a climbing bike, though, the SL7 has picked up a bunch sprint, thanks to Alaphilippe's Deceuninck-QuickStep teammate Sam Bennett on stage 10 into Saint-Martin-de-Ré. The result put the Irish national champion into the lead of the green jersey competition ahead of Bora-Hansgrohe's Peter Sagan.

Image 1 of 2
Image 2 of 2
Cyclingnews Newsletter