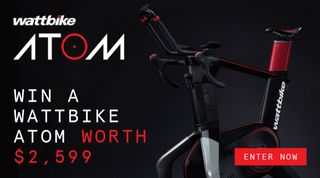 July has come and gone, and normally that would mean the best riders in the world have been duking it out in France, to see who will ride down the Champs-Élysées wearing the Maillot Jaune. This is not a typical year, and with the real race postponed to the end of August, pro riders are instead taking to digital roads to battle it out in the Virtual Tour de France. With most of the outdoor races getting eighty-sixed for this summer, Wattbike is giving away an Wattbike Atom smart bike to help you claim that elusive Zwift win.

To be entered for a chance to win, all you have to do is answer the question, when did Wattbike start making indoor training bikes?

While smart bikes are just starting to gain steam, with many of the popular trainer brands dipping their toe into complete bikes, Wattbike has been making training bikes since 2008. They proved to be such a valuable training tool, that 28 of the 31 medals for track cycling events at the London Olympics were won by Athletes who trained using a Wattbike, and the smart bikes are now used by the UCI and national bodies around the world, for training and talent ID. Current Time Trial World Champ and Twenty20 Pro Cycling rider Chloe Dygert also trains with a Wattbike, and has ridden an Atom Smart Bike to four, top-five stage finishes in the Virtual TDF.

The Atom isn't your typical gym bike; it's fully smart-enabled and speaks the same language as your favorite training app to simulate what you see on screen — with the ability to generate 2000-watts within +/- 2 per cent accuracy and simulate gradients up to 25 per cent.

The Atom also offers advanced performance metrics, like live pedaling dynamics through the Wattbike Hub app, and every touchpoint can be quickly, and easily adjusted to mirror your real road bike. Best of all, it means you won't wear out chainrings, cassettes and chains, grinding out miles in your personal pain cave.

There will be one (1) winner entitled to win Wattbike Atom (prize value $2,599). The winner will be drawn at random from all valid entries received and shall be notified by Wattbike via their email address supplied when entering the competition. The odds of winning will be determined by the number of eligible entries received. Prize(s) cannot be transferred, assigned, substituted, or redeemed for cash, and must be accepted as awarded, but Sponsors reserve the right to substitute any prize with a prize of equal or greater value should an advertised prize become unavailable for any reason. Sweepstakes open to over the age of 18 and legal residents of the three (3) U.S. states of New York, New Jersey and Connecticut except where prohibited or restricted by law. Prize(s) will not be fulfilled outside these three states. Winner(s) will be responsible for all taxes (federal, state, and local) and all expenses not listed herein related to acceptance and use of any prize. Any person winning $600 or more worth of prizes from a Sponsor in a calendar year will receive an IRS form 1099 after the end of the calendar year in which the prizes were awarded, and copy of such form will be filed with the Internal Revenue Service (IRS). This offer is limited to one entry per household, regardless of form of entry. Use of automated devices or methods of submission are not valid forms of entry. Any attempt at email or other alternative Internet entry is void. Sweepstakes begins at 9.a.m. Eastern Time (“ET”) on July 31st and ends at 11:59 p.m. ET on August 21st, 2020. As the full rules are a few clicks away, entrants should be given the deadline for when to enter by. The prize is as stated: no alternatives, cash or otherwise, are available. All entries are subject to the Terms and Conditions as detailed in full listed in the competition entry form.