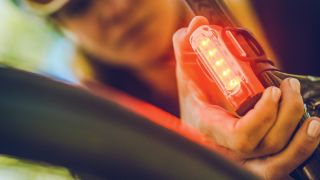 British Summer Time is, once again coming to an end in the UK. As the clocks roll back and winter creeps in across the northern hemisphere, evenings are drawing in and our daily dose of daylight is becoming ever shorter.

It is at this time of year that cyclists remember about lights and dust them off ready for the winter ahead, but like many brands, we believe they should be used year-round. Cyclists, or anyone on a bike for that matter, should have quality lights switched on no matter the conditions.

Be safe, be seen

In a world where attention spans are ever-shortening, driver distractions are ever-increasing, and speeds are ever-growing, the importance of being visible whilst cycling on the road has never been greater. Speak to riders at your local Sunday club ride and there will undoubtedly be numerous recounts of close-calls or near misses where a distracted driver's attention has strayed to their smartphone or in-car entertainment system at the most inopportune of moments. Being seen at all times shouldn't be considered an optional extra, it should be priority number one when you're on the same playing field as vehicles 25 times your weight. As such, you should always err on the side of safety, opting for more light than you think you need.

Being seen is one of the single greatest investments one can make in their safety, both in urban settings where road users have endless distractions, and extra-urban where streetlighting is non-existent after dark. Studies have shown that the use of permanently running lights reduces the occurrence of multiparty accidents involving cyclists significantly. For daytime riding, the Lezyne Strip Drive Pro has you covered with its 300-lumen daytime flash mode.

It's important to be seen from any angle, too. While some bike lights will simply point their beam in a narrow field, the Lezyne Strip Drive Pro 300 is designed with a greater-than-270-degree field of vision which will significantly enhance visibility at junctions and roundabouts.

Not all bike lights are created equal. You'll have heard the phrase 'you get what you pay for', and with Lezyne, you aren't just buying a light, you are investing in your visibility and safety on the road, and in a product that offers guaranteed performance, quality and peace of mind.

For such a safety-critical product, Lezyne knows it is important not to cut corners, and the Strip Drive Pro 300 is a trustworthy, well-engineered rear light. This is the 9th year of Lezyne lights, and in that time the company has engineered, manufactured, and developed it's range over many iterations, taking into account customer feedback and its own extensive testing.

Not only will an unbranded or budget light likely have a distinct lack of brightness, but there's every chance it will also be poorly constructed, which could result in faults that can switch off the light at any moment. With a rear light, you're unlikely to notice until it's too late, so for this reason alone, it's worth investing in a product you can trust.

The Strip Drive Pro 300 is the range-topping rear light from Lezyne, featuring five LEDs and 11 different brightness settings, the brightest of which is 'Daytime Flash Mode' with its 300-lumen output. At night, Lezyne recommends using the 50-lumen 'Blast' mode so as not to dazzle drivers.  There is also a memory function so that each time you turn the light on you are presented with your preferred setting.

At 53g, the Strip Drive Pro is a feathery addition to your ride and features Lezyne's new Wide Angle Optics lens which enables greater than 270-degrees of visibility. This feature can also be found on a number of Lezyne's other rear lights, including the Strip Drive, Strip Drive Pro, KTV Pro Rear, Femto USB Rear, KTV Drive Rear and the KTV Pro Smart Rear.

Updated for 2020, the Strip Drive Pro 300 does away with the chip style USB in favour of the more common Micro USB port, which makes for easier charging. This has also enabled engineers to shorten the total length of the light body, taking up less real estate on your seatpost which means it can now fit onto a shorter seatpost, or you can double up on rear lights for extra peace of mind. It can now also be mounted to flat, round or aero seatposts thanks to the inclusion of adaptors.

The charging port cover - formerly a cap that some users reported to have misplaced - has also been updated, the latest model features an attached cap that is impossible to leave behind. Finally, battery life has also been addressed, with a new emergency mode that will last 53 hours, the 50-lumen Blast mode will carry you three hours into the night, and the 150-lumen flash mode sees seven hours of life.

The £50 Strip Drive Pro isn't the only choice in the Lezyne range, however. Both front and rear lights start at just £13 with the 15-lumen Femto, and there are 13 rear light options across all budgets. The front light range consists of 21 models, working up to the £150.00 1800-lumen Mega Drive. While your personal well-being is worthy of any investment, there really is a Lezyne light for anyone.

You can view the full Lezyne range at ride.lezyne.com