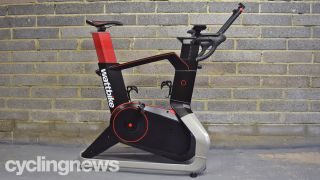 Wattbike launched the next-generation Atom this summer, and with the new model came a collection of updates designed to improve the brand's best at-home smart bike. Taking in feedback from the users of the original Atom, Wattbike focussed its efforts on improving the responsiveness of resistance changes, perfecting the accuracy of the data measurement, and mimicking the real-world ride feel as closely as possible.

To achieve these goals, Wattbike updated a number of key components for the next-generation Wattbike Atom, replacing the resistance system entirely, updating the crank angle sensors and adding speed sensors to the flywheel. Read on for an in-depth look at what those changes mean.

First of all, Wattbike introduced an all-new electromagnetic resistance system, replacing the mechanical system on the former model. On the original Wattbike Atom, the resistance was operated using physical magnets, which were attached to motors. Upon changing gear or a change in gradient on Zwift, the motor would move the magnets closer or further away from the flywheel to affect the resistance. The system was effective, but it was often slow to react.

The new electromagnetic resistance system works by passing an electric current through coils which in turn creates a force to resist the movement of the flywheel. The speed of this electric current means gear changes and resistance changes are felt immediately and smoothly.

Wattbike has also updated the crank angle sensors. On the original Atom, the torque was measured twice per revolution of the pedals, whereas the updated sensors measure at 48 times per revolution. This means that at a cadence of 90rpm, your data is being measured over 4300 times per minute. Coupled with the faster actuation of resistance to the flywheel, the new Atom's responsiveness is faster again. This allows more accurate reading of the data providing the next-generation Atom with an accuracy level of +/-1%.

The next-generation Atom also sees new speed sensors, allowing Wattbike to cleverly adjust the resistance to make for an even more lifelike feel.

This flywheel speed sensor literally measures how fast the flywheel is spinning, and given Wattbike engineers know the combined weight of the flywheel, pulley and other associated parts in the drivetrain, they were able to program the next-generation Atom to calculate the kinetic energy in the system at any given time. With knowledge of the kinetic energy in the system, it is then able to acutely adjust the resistance to better-simulate a rolling real-world ride feel.

It is also then able to track accelerations and decelerations of the pedal stroke to make for better load application for sprinting efforts, ultimately resulting in more effective and more accurate training.

Finally, and no less importantly, the next-generation Atom is given the same award-winning design as its predecessor, but with a few improvements. For example, the seatpost has been altered to make it more rigid and sturdy, an improvement to the sealing of the casing better protects against sweat and dust ingress, and the relocation of the power port to the underside of the body further protects against contamination; further increasing the durability of the system.

An even better ride feel

With the speed and smoothness of the resistance changes and the knowledge of the kinetic energy in the system, the next-generation Atom improves the reactivity to software such as Zwift. Once your in-game avatar hits a change in gradient, the Atom Next Generation responds without delay.

With the immediate resistance change comes immediate gear changes, and when the going gets tough and you wish to adjust your gear choice, the next-generation Atom means no more delays between hitting the shift button and feeling the change of resistance. This is most beneficial during races on indoor cycling apps such as Zwift, Rouvy and RGT, meaning you can retain a smooth cadence during variable-power efforts.

The use of the electromagnetic resistance system removes the need for additional motors. Fewer moving parts means fewer parts to service, which in turn means there's less to go wrong. In addition, the improved design and relocated power port protect against sweat ingress to further improve the system's durability.

With this new system, the maximum resistance of the system has been increased from 2000 to 2500 watts. Not only does this mean big-power track sprinters are able to better track their power output, but it also means that the next-generation Atom is working well within its constraints for the peak power outputs of us mere mortals, which will in turn increase data accuracy.

Even greater granularity of data

By measuring torque 48 times per revolution instead of just two, the granularity of data is vastly improved and the accuracy of power measurement has doubled. Whereas the Original Atom promised an impressive accuracy of +/-2%, the next-generation Atom now offers a deviation of just +/-1%. Therefore, a 200-watt effort will be measured within just 2 watts of error.

The use of an electromagnetic resistance system also opens the product up for future innovations and future-proofing, providing a great investment for your indoor training needs long term.

The next-generation Wattbike Atom is available for £90 per month, find out more.