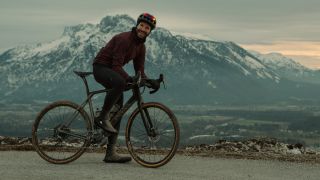 When Canyon launched their gravel road offering back in March 2018, the major talking point was, understandably, the handlebar. A 'double-decker' handlebar that is now as distinguishable as the Canyon logo that adorns the downtube. The intrigue that surrounds the Canyon Grail is well documented and easily found, raise the subject at your local group ride and the conversation will often involve preconception, divided opinion, and an aversion to change. Rarely, however, have the naysayers ever climbed aboard a Grail and put their preconceptions to the sword. We invite them to try.

Listening to its customers and trusting the science, Canyon has stuck with the unique Grail cockpit for 2020. In addition, Canyon has added some all-new stand-out paint jobs and builds that take advantage of Shimano GRX and SRAM AXS components to offer wider gear ratios for greater gravel prowess.

Thanks to its clearance for 42c tyres, the Grail is ready to tackle everything from singletrack to street, with fender mounts aplenty to satisfy the winter-commuters, and a tailored set of bikepacking bags from Topeak to tease off-grid adventurers.

The wheelbase, at 1029mm (for a medium), is 40mm longer than an equivalent Endurace, ensuring the Grail remains stable over rough ground. However, by using wide handlebars and a short effective stem length, the Grail is lively and nimble when quick handling becomes necessary. Definitively not a slouch, the Grail was recently ridden to Grinduro 2019 victory by Canyon DHB's Callum Macleod in record time.

The Grail cockpit is like no other. By its design, it is stiff in the drops where you need it most, providing more responsive handling and greater power transfer during max effort sprints. In addition, the Flex Area takes advantage of carbon's elasticity and its ability to absorb vibrations to provide greater compliance on the tops. In fact, the Grail cockpit is 7x more vertically compliant than a conventional setup, which makes for all-day cruising comfort.

While Canyon's unorthodox reinvention of the simple handlebar is an easy target for critics in a market of conformity and lookalikes, the love-hate aesthetic and mere 120g weight penalty (over a conventional Canyon cockpit) is a small price to pay for a handlebar that helps the Grail to redefine a genre, providing 15mm of height adjustment, greater comfort, power transfer and improved handling, all with the added bonus of extra hand positions.

With its unconventional design, conventional stack & reach measurements would be incomparable beyond the Grail range. For this reason, Canyon has devised Stack&Reach+. This is essentially a normal reach measurement plus the length of the stem and a normal stack measurement measured to the centre of the tops. It is a system which makes comparing bikes throughout the Canyon range a much more simple process.

The VCLS Post 2.0 is another out-of-the-box innovation from Canyon. A game of two halves, if you will. Rather than a single rounded seatpost, the VCLS 2.0 uses two semi-circular halves, bolted together at the bottom, which slot together to form a complete rounded seatpost. Towards the top, the two halves separate to create a leaf spring-like mechanism that provides 20mm of vertical compliance. The clamp itself is joined by pivoting joints which enable the saddle to remain horizontal as the seatpost flexes.

The Grail frame is available in two different carbon layups, the Grail CF SLX and Grail CF SL, and an aluminium option, the Grail AL. All carbon fibre builds feature the Grail cockpit, whereas the AL comes with a more typical bar and stem.

The range-topping CF SLX, has a frame weight of just 830g, and is available in two builds. The Grail CF SLX Di2 comes complete with a Shimano GRX Di2 RX815 groupset and Reynolds ATR wheels. The Grail CF SLX 8.0 ETAP features a SRAM Force eTap AXS groupset paired with DT Swiss GRC1400 wheels. Both of which feature the VCLS 2.0 seatpost and come in a choice of Forest Orange or Dark Navy.

Below this, the Grail CF SL, with its 1040g frame weight, is available in four men's and three women's builds. The Grail AL is available in three men's and two women's builds. All builds come in easily under 10kg, with the most budget-friendly Grail AL 6.0 weighing in at 9.8kg. The CF models start at 8.62kg, working down to just 8.22kg for the CF SLX 8.0. Powerful hydraulic braking is available across the board, as are tubeless-ready wheels, with every model in the range coming fitted with Schwalbe G-One Bite 40mm tubeless tyres. While 700c wheels are the norm, XXS and XS frames are fitted with 650b wheels and tyres to achieve uniform fit across the entire size spectrum.

Gear ratios depend on groupset choice. Builds specced with SRAM Force eTap will be complete with a gravel-minded wide range 11-50 cassette paired with a 42t chainring. The more-budget friendly SRAM Rival builds swap out the 12-speed cassette for an 11-42 11-speed option. GRX equipped builds feature a more road-going 11-34 cassette paired with a 48-31 2X chainset.

All road, gravel, groad, new road, adventure. Whatever you want to call it, this is where the Grail excels. While the genre of gravel still looks to define itself, the Canyon Grail will happily go wherever the sector chooses, before dismissing it with ease. No longer do you need to decide between on-road and off-road for your next bike: Canyon has created the Holy Grail.

Head over to Canyon.com to order yours today.