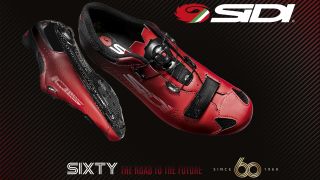 For Sidi, 2020 is more than a new decade, this year marks a huge milestone. Sidi celebrates 60 years of business and a history steeped in creating innovative products for cycling. Not just 60 years old Sidi was also originally founded in 1960, started by Dino Signori in a small workshop. From these humble beginnings, Sidi rode the explosion of energy and creativity brought with the swinging ‘60s. Beginning in a time that saw enormous progress in art, culture and technology Sidi are proud that they have been able to make their own impact in the world of cycling. Their passion and innovation have seen the continual design of cutting edge products that seek to meet the ever-expanding demands of cycling.

To celebrate this significant milestone Sidi have released the SIXTY shoe, a slimmed-down elegant road shoe designed for ultimate pedalling performance whilst still retaining the durability and fit that has become synonymous with the SIDI brand. The new SIXTY is not only a celebration of what Sidi has been able to achieve over the last 60 years. It marks a milestone in Sidi’s evolution, combining their finest technology and materials it gives an insight into what we can expect from the brand in the future.

For Sidi, the SIXTY is about minimalism and the new Tecno-4 closure system drives this ethos. The closure is inspired by the original system devised in 1988 that has since been developed and featured on powerhouses of Sidi’s range - the Shot and Wire 2 Carbon. This new system relies on a single rotor, rather than a double system on the previous Tecno-3 shoes. With micrometric closure to giving fine adjustments to tension and a greatly improved cable release system. Not only does the move to a single dial save weight but also speeds up getting the shoe on and off. All the components of the Tecno-4 rotor can be replaced which should assure the longevity of the shoe. Adjustment for the toe box is managed by a high-security velcro strap.

The move to a single fastener brings with it an improvement to aerodynamics by smoothing the shape of the uppers. Sidi has used their Microfibra Techpro material for the upper. This micro-fiber PU is made in Italy and has been chosen for its durability, lightness and water repellency. The Microfibra Techpro material also features an anti-mould treatment to help keep the shoes fresher as well as claiming environmentally friendly credentials.

A newly designed integrated heel support has been used for the SIXTY. Lighter than the previous designs, it relies on an anatomical shape to hold the foot in place and stabilise during hard efforts or prolonged periods of pressure. REFLEX inserts have been added to the rear of the shoe to aid rider visibility in poor conditions for better safety.

The carbon sole is both thin and light to give the rider a close connection to the bike when pedalling. Through manipulation of the carbon weave Sidi has been able to combine the stiffness needed for superior power transfer with improved comfort. By introducing a little extra flex around the toe area the sole helps relieve pressure to the tendons and help maintain circulation while riding. Cleat configuration has been made easier with a lateral and fore/aft cleat alignment scale printed on the carbon as well as a Look Memory Eyelet® for easy cleat alignment and replacement. The sole features integrated vents and air channels for cooling airflow in hot weather but can be closed off during colder seasons. As with other Sidi models, the toe pad/vent cover and heel pad all feature replaceable hardware.

Sidi says that the SIXTY “tells the story of the soul and evolution of the company, but it is also a new starting point to set off on a quest to make more dreams come true”. The modern and svelte design of the SIXTY reflects the modern age of cycling, a world of advanced technology and marginal gains. For the many fans of Sidi’s cycling footwear, the SIXTY certainly gives an exciting insight into the direction Sidi are going.

The SIXTY retails for £330 and Sidi has the options of four colourways - white, red, blue and black. The new shoe has already garnered some big name fans including 2019 Tour de France champion Egan Bernal, who was presented with a special custom gold pair by Signori himself.

Watch the video with Egan Bernal